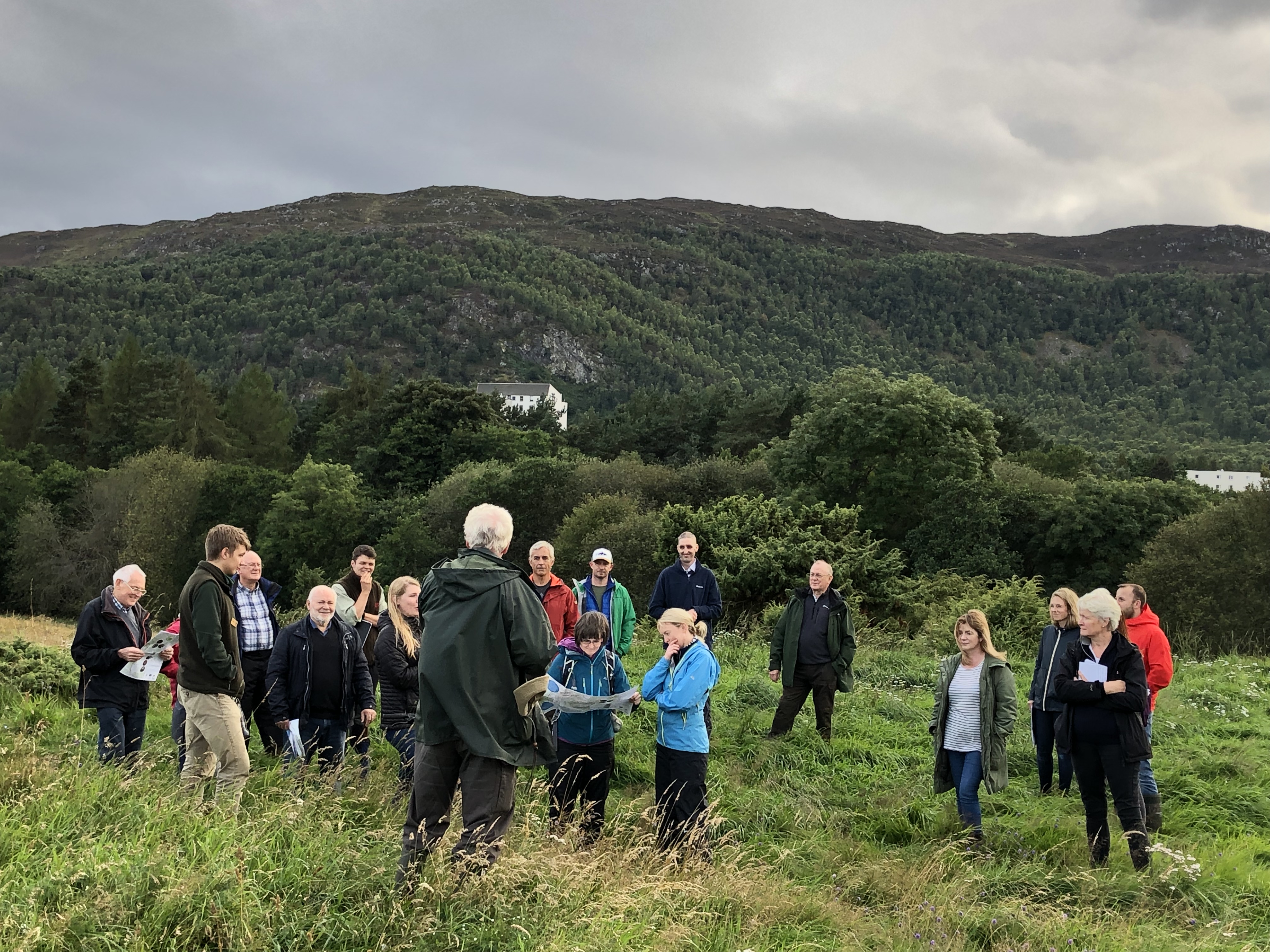 We then walked up to the first point of interest. Johnnie Grant spoke about where we were, just opposite the Aviemore Police Station, the paths and road connections and the history of the project which was the idea of the Aviemore and Vicinity Community Council (AVCC).

John Grierson, the current Chair of AVCC,  showed us the land for the An Camas Mòr half of the Aviemore Countryside Park which will expand to include a natural arena, woodland and wetland on the Rothiemurchus side of the river connected to the existing Park by a path and bridge.

The next stop was a three minute walk to the Aviemore end of the High Street where Johnnie explained how the proposed shape of the street has been designed as a place for people to meet people, with the school, café, shops, crafts, repairs, health and other businesses and public services with parking behind.

We then moved up the high street, where Johnnie explained how the master planner was chosen because of his interest in listening to people in the street, outside Tesco,  how they thought Aviemore could be better and understood the need to design a village that is suited to local lifestyles and affordable to rent or for people in local jobs to be able to buy.  Shelter would be provided by trees around the edge, lower buildings at the perimeter and taller buildings (not over 3 and a half stories high) in the centre. To catch the sun, making it more energy effective, the high street would run East to West and curve gently. It would have apartments over the shops, workshops and offices on the Northside, and include some larger houses, e.g. guest houses on the Southside.  James Grant talked about design, affordability and the Highlands Small Communities Housing Trust.

We did not discuss it,  but everyone was able to appreciate the extensive planting of trees on most of the site; it was mainly a treeless windswept cattle feeding area when it was first included in the Local Plan.

We saw how as a Nordic style woodland community, it would be different to other villages in Scotland and more akin to the ancient tradition of homesteads in clearings in Rothiemurchus and, at a different scale, akin to how the Coylumbridge Hotel fits in the trees.

After that, it was back to the Fishery for refreshments and a chance for people to chat with us and each other about the visit.

Both work locally, they are looking to buy a house and settle down in the area. They sat down with us after the tour of the site to tell us what they thought and explain what An Camas Mor would mean for them.

Lauren, CEO of Protect Our Winters

Has lived in Aviemore on and off for over ten years, she sees An Camas Mor as being her best option for buying a house in this area and being able to properly put roots down here. She is also interested in the sustainable solutions that are included in the design for An Camas Mor.

If you would be interested in coming along to our next site visit or you have any questions please get in touch with us hello@ancamasmor.com